← more from
Imani Records
Get fresh music recommendations delivered to your inbox every Friday.
We've updated our Terms of Use. You can review the changes here. 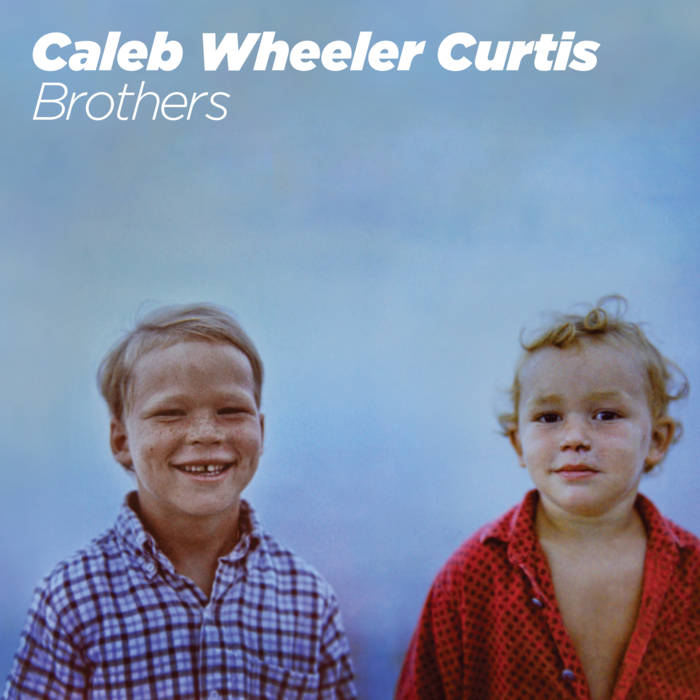 There’s no bond quite as indelible as the one shared by brothers – ties of profound understanding, playful antagonism, unspoken communication, inside jokes and, at its heart, a deep and abiding love. On his debut as a leader, saxophonist/composer Caleb Wheeler Curtis celebrates the ties of brotherhood, whether shared by blood or forged on the bandstand.

The story is told by the charming image on the cover of Brothers, due out July 25th via Orrin Evans’ newly revived Imani Records label. On the left is the beaming face of a young Caleb Curtis; on the right, the tousled visage of his younger brother Nico. In the two children we can see family resemblances and individual differences, two distinct personalities that can never be wholly separated.

Flip the album over and you’ll find another list of brothers, those Curtis has made by choice and musical compatibility on stage and in the studio. Producing the session is Orrin Evans, who enlisted Curtis first as a member of his Captain Black Big Band and later as part of the band that recorded his 2016 album #knowingishalfthebattle. The band of Brothers is in large part made up of artists the Ann Arbor-born saxophonist has met through Evans’ circle.

Curtis is a member of Color Theory, the band led by his main frontline partner on the album, trumpeter Josh Lawrence. The bass chair alternates (and, in two instances, is shared) between Eric Revis, a member of Evans’ collective trio Tarbaby as well as the Branford Marsalis Quartet, and Luques Curtis, who co-leads a band with his own brother, pianist Zaccai Curtis (no relation to Caleb and Nico). Drummer Mark Whitfield Jr. shares stages with his pianist brother Davis as well as their father, guitar great Mark Sr., in the Whitfield Family Band. Tenor saxophonist Seamus Blake (John Scofield, Antonio Sanchez) adds his powerful voice to the mix on three tracks.

“Orrin has been very generous about bringing me into the fold,” Curtis says. “I’ve become very close with these guys, and in that environment everybody feels so open and relaxed. Nobody feels the need to impress each other so you get to see everyone for who they really are.”

Brothers opens with the title track, which spikily captures the feeling of sibling rivalry with its friendly but sparring sax and trumpet lines. As throughout the album, the chordless environment leaves plenty of open space for the players to roam, interact, collide and dialogue with one another. The instrumentation was Evans’ suggestion; Curtis originally asked him to play on the session, but the pianist felt this more stripped-bare setting would better showcase Curtis’ unique voice and wide-ranging exploration.

Curtis is no stranger to chordless settings. While this album is the first under the saxophonist’s own name, he previously released the critically acclaimed outing Neighborhood with the collective quartet Walking Distance. This fall they’ll release their follow-up, Freebird, inspired by Charlie Parker and featuring guest pianist Jason Moran.

The yearning “A Place of Our Own” was penned by trombonist David Gibson, a compatriot from the Captain Black Big Band, and in Curtis’ thinking stakes out a territory for this cadre of rising jazz voices. “For me it means our place in playing this music this way,” he explains. “This album feels like a portrait of the things that I like: here we are, the people that I like playing with, playing music that I not only like playing but expresses my values. I didn't make a record that somebody else wanted me to make.”

The short, blistering “Tried in the Court of Public Opinion” was originally written as a critique, but has taken on a more complex meaning in the wake of recent grassroots social movements undertaken to correct longstanding wrongs. “It’s an evolving question,” Curtis admits. “I still feel strongly that people have the right to defend themselves, but it’s become clear that sometimes the public is the only place where justice can happen.”

The dark and mysterious “On the Other Side of Time” is a group improvisation featuring both bassists, with Curtis contributing deep blurts and moans from the saxtrumpet, a trumpet played through a saxophone mouthpiece. The piece was recorded as an introduction to late bass legend Charlie Haden’s “Song for the Whales,” which the band plays with a moving, elegiac feel. “Cartoon Element” is an anagram for Haden’s most renowned collaborator, Ornette Coleman, whose influence can be felt throughout Brothers in the chordless line-up as well as Curtis’ zig-zagging melodies. “Ornette is a very important influence,” Curtis says. “I have a visceral reaction to certain players -- Eric Dolphy, Gary Bartz and Johnny Hodges as well as Ornette. Emotionally and physically, it’s almost hard to deal with because they’re so striking in their sound, conception and approach.”

Both “Requiem for False Equivalence” and “Fallacy of Ancient Wisdom” take jabs at some unfortunate tendencies in the cultural conversation. The latter especially strikes home in this context given Curtis’ urge to break free of the jazz orthodoxy. “Smash” is self-explanatory – sharp, loud and forceful. “The Nearest” is the opposite, a lovely chorale originally written as an introduction to Curtis’ arrangement of Billy Strayhorn’s “Isfahan” that becomes a unique drum feature. “I’ve never understood why the band always has to leave the drummer alone for their solo,” Curtis says; here, the ensemble creates a lush bed for Whitfield to ride upon and play off of.

“The Nearest” is followed by the album’s most straightahead cut, “The Choices We Make,” a punchy bop tune with a taste of piquant funk, pushing through its lively groove with sharp elbows. Finally, “Path of Totality” was inspired by the 2017 total solar eclipse, with the passing shadow of the moon evoked by a breathy drone recorded by Curtis singing into his horn.

Warm yet challenging, eclectic but familiar, thriving on both friction and compatibility, Brothers is a stellar debut that fully encompasses the sparks and embraces that only those as close as brothers can experience.

Imani Records
Founded by Orrin Evans in 2001, Imani Records released the pianist’s own debut, Déjà Vu, as well as albums by the neo-soul ensemble Luv Park and the collective groups The Band (with Evans, JD Allen, Sam Newsome, Nasheet Waits and Reid Anderson) and The Trio (with Evans, Madison Rast). Brothers marks the first release on the label following a decade of dormancy as well as a newfound focus on releasing music by the young, innovative musicians with whom Evans regularly collaborates.

All songs by Caleb Wheeler Curtis (BMI) except A Place of Our Own (David Gibson, BMI) and Song for the Whales (Charlie Haden, Liberation Music BMI)

Brooklyn, NY based saxophonist Caleb Wheeler Curtis “lives at the junction of rigorous preparation and willingness to explore.” He plays on two GRAMMY nominated albums by Orrin Evans and the Captain Black Big Band, and is a a prolific bandleader, composer and collaborator. ... more

Bandcamp Daily  your guide to the world of Bandcamp